The DEAD series is back…newly edited, revised and contracted for more books in the series let the fun begin with DEAD Awake (formally Waking Up Dead) to kick off on July 20that Musa Publishing!
Answer Lizzie’s question to enter the prize drawing for a Musa Publishing gift certificate.
What immortals would you like to see connect with Dovey and her group in future stories? 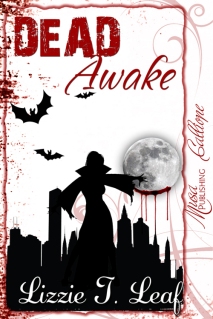 Waking up to discover you’re dead isn’t a gal’s idea of fun.

Deb Stein loved to party until she took the hunk dressed as a vampire to her bed. Now she’s one of the living dead and pissed about it. Plus, she has to find a new identity and WORK!

Deb and Scott.  Aaron ran the names through his head a moment before they clicked.  He had crashed the party of Deb Stein, first class socialite and paparazzi darling.  No wonder she looked familiar.   This woman’s appearance created more media madness than Paris, Brittany or Lindsay when she showed up someplace.  She could out-party any of the celebrity bad girls. Plus she had the money to do it with after she turned thirty and inherited the millions her father had left to keep his little girl in the lifestyle she was accustomed to.

Given the tension between her and the couple, Scott would be Scott Hanson, the former boyfriend who had dumped Deb for Jenny Rames, the brunette clinging to his arm as if she was an attached appendage.  The love triangle had created headlines in the tabloids for months.  Great fodder for the news rags when any of the beautiful people had love problems.  Throw in the fact that Jenny was Deb’s best friend and the cause of the split, the story became a feeding frenzy among the piranha scandal sheets.

Aaron reached into Deb’s mind and probed her thoughts.  The fury raging there almost caused him to blow a fuse. This was one pissed lady and not because she lost the love of her life.  No, it was an ego thing; he’d dumped her before she had the chance to tell him to take a hike.

Deb was none too pleased with Jenny, either.

I expect my friends to cover my back, not stab me in it like Jenny did. The slut bitch not only went after Scott, but told the press things about me that she knew so I know she was the source! Hell, she was with me in school when we slipped out at night or smoked grass—none of those escapades needed to turn into fodder for the gossip mongers.

How can I save face and not get another humiliating slam in the scandal sheets tomorrow? Wait—maybe that good-looking guy in the vampire costume that I just blew off can help me—

Aaron straightened his tie, pushed his way through the spectators to her side and slipped an arm around her waist.  “Darling, you promised not to be gone so long.”

He had to give her credit for maintaining her cool when he appeared beside her or the intimate manner in which he touched her.  Nothing in the way of surprise registered on her face when she turned to him and smiled.  “I’m sorry love, but I didn’t expect to be detained by the arrival of new guests.”

“Oh.  Are they important enough that you neglect me for them?”  Aaron stroked her back while his gaze roamed over Scott and Jenny.

“No.”  Deb took Aaron’s hand.  “At one point I thought they were, but not now.  They have no importance in my life anymore.”

Head held high, she linked her arm with his and led him through the gaping crowd.  Aaron picked up the grumbling of disappointment from several on-lookers now that the show was over.

The rich want to see blood as much as any street gang.

Will also be available at Amazon Kindle, Barnes & Noble Nook and All Romance eBooks shortly after the Musa release.

Connect with Lizzie at: